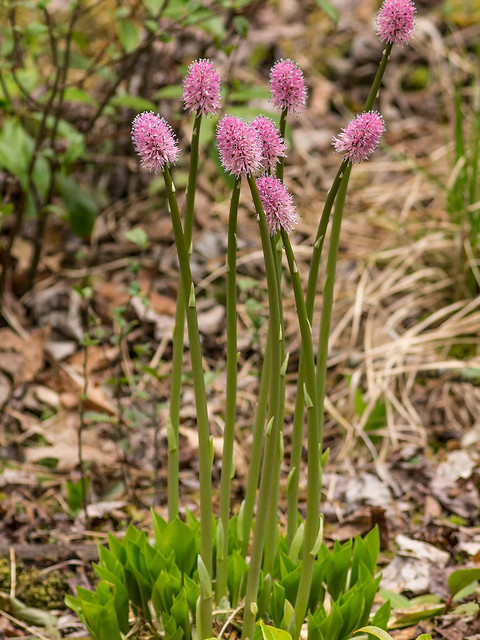 Helonias bullata, swamp pink, is a member of the family Melanthiaceae (formerly placed in the family Liliaceae). It is federally listed as Threatened. Helonias bullata formerly grew throughout the Atlantic seaboard, from Staten Island to the Appalachians. Today it grows in isolated populations in several of those states. In South Carolina, one population grows in Greenville County.

In South Carolina, we have one population of Helonias bullata comprised of 5 colonies. This population is situated in Watson-Cooper Heritage Preserve in upstate Greenville County. Three of the colonies are relatively small and are very closely spaced. The other two colonies are considerably larger. The last monitoring was done in May of 2016, where around 1100 plants were counted. The colonies are known as HB1, HB2, HB3, HB4 (Large), and HB5 (Ben).

Although the area where these plants grow is generally known as a “Montane Bog” or just “Bog”, it is actually a “Fen”. The difference between “Bog” and “Fen” is as follows:

Bog: any wetland that accumulates peat, a deposit of living or dead plant material — often mosses, and in a majority of cases, Sphagnum moss. Bogs are fed solely by rainwater. They are predominately acidic and provide good habitat for acid-loving plants such as pitcher plants and some orchid species. They are rather rare in the Southeast.

Fen: a form of wetland which is usually fed by mineral-rich surface water, streams, or groundwater. Sometimes fens are alkaline (higher pH) rather than acidic (lower pH).

Here is an image from the Large colony showing the slow-flowing stream of water which keeps the plants in their preferred, wet environment: 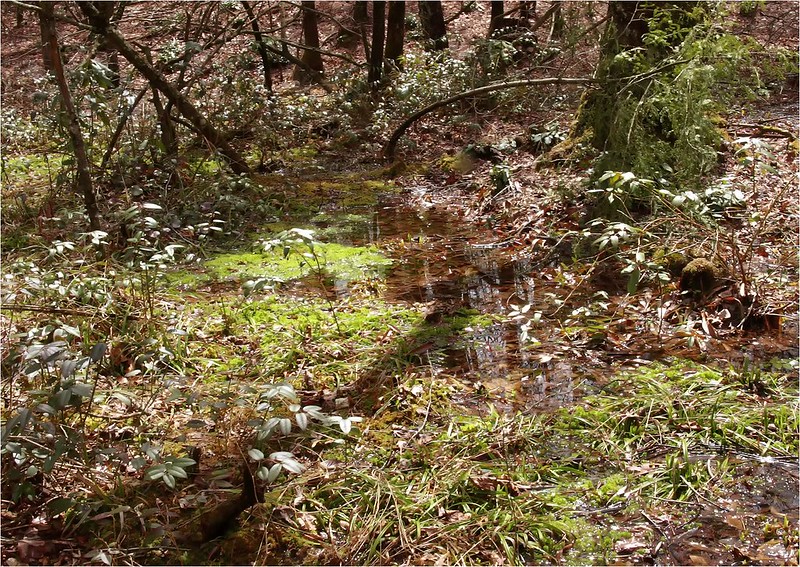 The foliage arises from a large rhizome which is buried in the sandy/loamy substrate. Here is an image of the thick, starchy rhizome after it was uncovered by a new waterway in the fen: 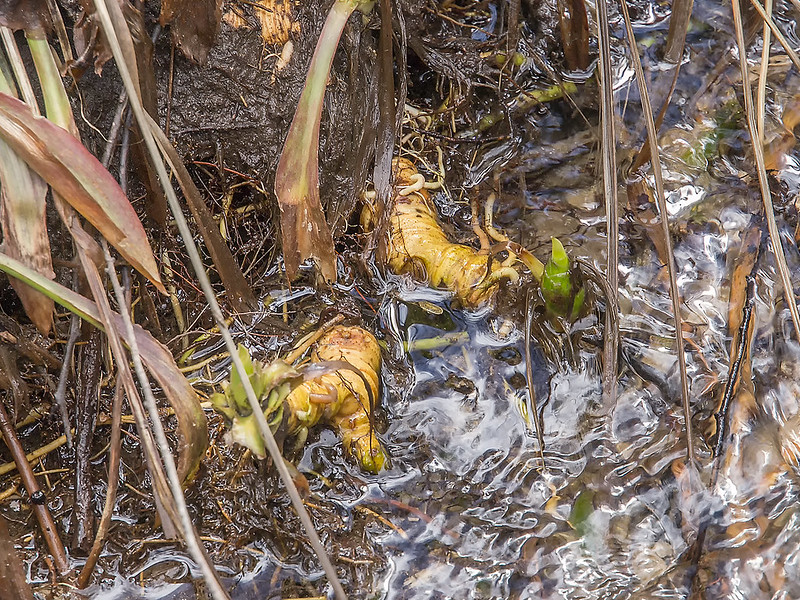 As seen in the next image, the newly emerging leaf rosettes are not necessarily new plants, but may be multiple sprouts emerging from shared rhizome. Each rhizome, though, will produce only a single flowering stem. This adds a complexity to counting the plants in a colony. Do we count the separate rhizomes or attempt to determine the number of separate plants? We can count the number of flowering stems to separate the rhizome from the rosettes, but what to do if the plant does not flower in a particular year? 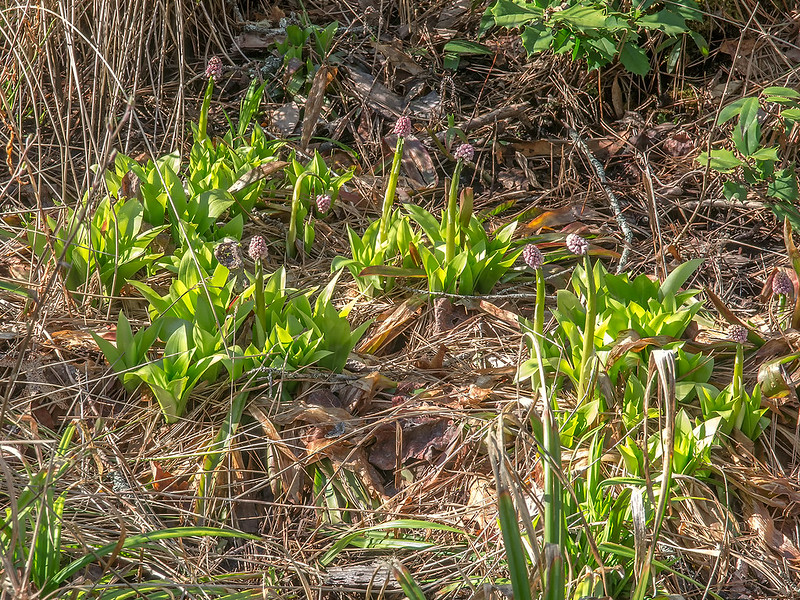 In 2009, after opening up the area on the Large colony, we had this to happen: 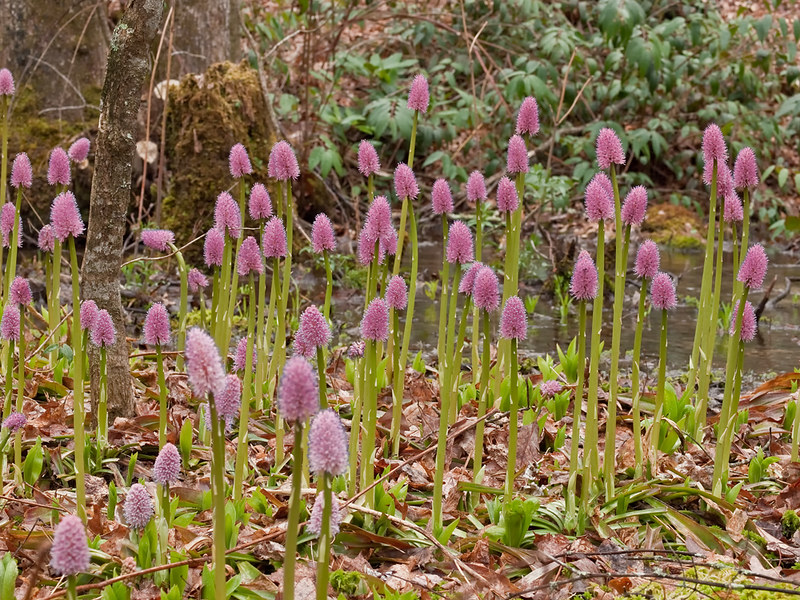 Fortunately or unfortunately, I’ve not seen such a mass blooming since then. But, again, how do we make a count?

There are four stages that describe the emergence of the inflorescence. The first is the “button” stage – Left image. The second is the emerging stage where the flower buds first become visible – Right image:

The next stage is the maturing of the inflorescence, but the buds have very little color – Left image. And finally, the mature inflorescence – Right image:

Let’s talk a bit about pollination. These plants produce flowers with a delightfully, heady fragrance. Often, this fragrance can be detected from many feet away from the plants. It manages to attract a variety of pollinators. I’ve photographed several insect pollinators on the plants at Watson-Cooper HP. Here are some images of these pollinators, hard at work. Left is a Bombus species, and right is an Halictid species covered with pollen:

There are also some butterfly species which find the flowers irresistible: 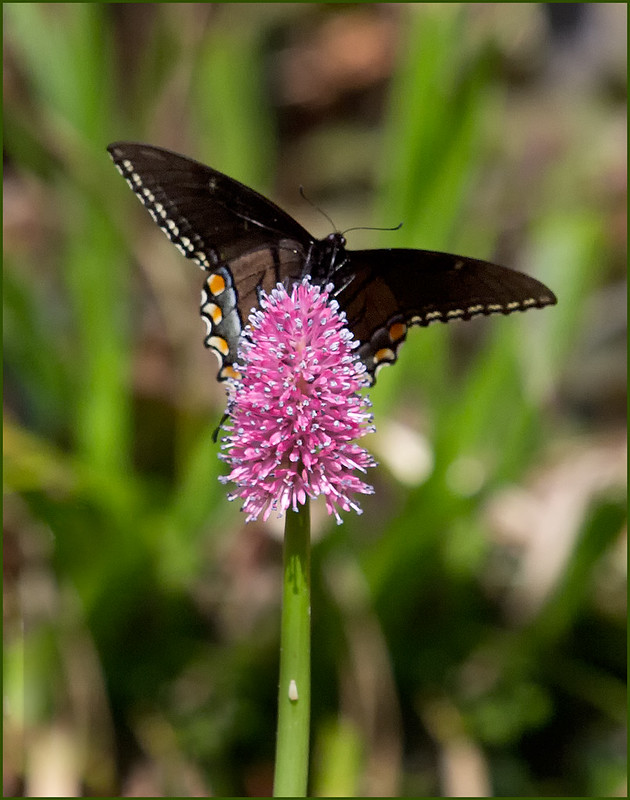 Besides the hazard of changing hydrology or destruction of the habitat, there are other dangers lurking in the woods surrounding the colonies. One big one is herbivory. This is most obvious when the plants show damage from deer. Here is a shot of several plants whose flower stems were chewed at peak anthesis: 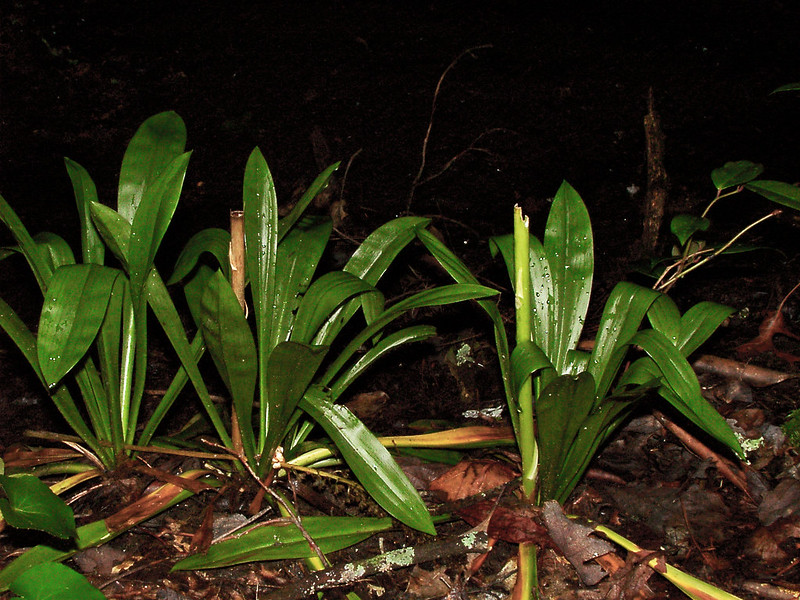 Here’s another shot of a number of plants whose seed capsules were eaten: 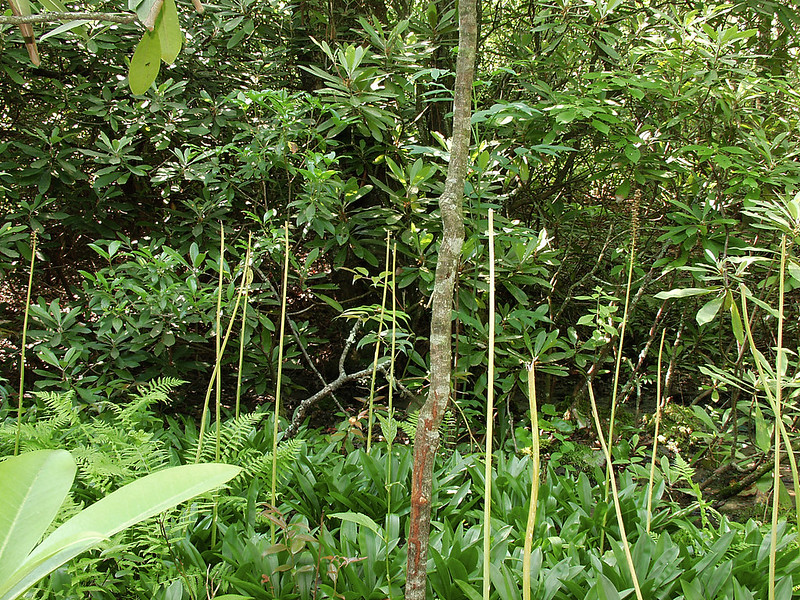 Speaking of seed capsules… After pollination, the seed capsules begin to form. According to a recovery plan paper prepared by Region Five of U.S. Fish and Wildlife Service in 1991, “Helonias is highly self-compatible. In experiments, Sutter found that 100 percent of flowers set seed in selfed treatments.” That’s very good news for the species if there are pollinators present. But, “Sutter found that naturally occurring self-pollination to be less efficient, with 77 percent of the flowers setting seed.” However, “Cross-pollination resulted in 89 percent of the flowers producing seed. Sutter reported eight seeds produced per carpel with an average of 24.67 seeds produced per flower.”

Another interesting result of the study was that “Seed survival also appears to be low. Maddox found that seeds sown immediately after collection had a 100 percent germination rate (although seedlings were short-lived) as compared to those planted four weeks late, which had no germination… While this could mean that seeds are viable for only a brief period, leading to lack of seed bank, it could alternatively be the case that seeds which do not germinate immediately go dormant.”

One final note: “Maddox suggests that there is no correlation between plant size, plant density, pH, soil moisture, and probability of flowering.” Apparently the plants don’t read the book and follow their own schedule…

What does all of this mean for our population at Watson-Cooper HP? I think we should gather our own data over time and see if these figures hold true for our population. I have noted few recruitment of plants in the Large colony, but just recently, I found many small plants at the Ben colony. I believe much is still not understood about these plants.

Here is an image of an inflorescence that has formed seed capsules. Apparently, each flower was successfully pollinated. Note that the flower petals have lost much of their pink coloration but still remain: 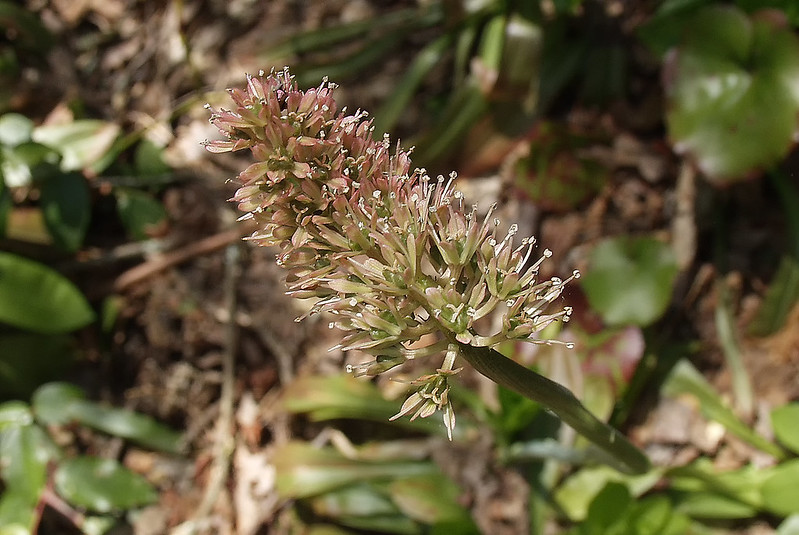 Here are ripening seed capsules in late May. Note that the flowers on the inflorescence have lost their petals. After the flowers are pollinated, the flowering stem continues to grow. At peak anthesis, the stem is generally in the 10-inch to 15-inch range. At the time of capsule dehiscence, the stem may be 48 inches long or even longer!: 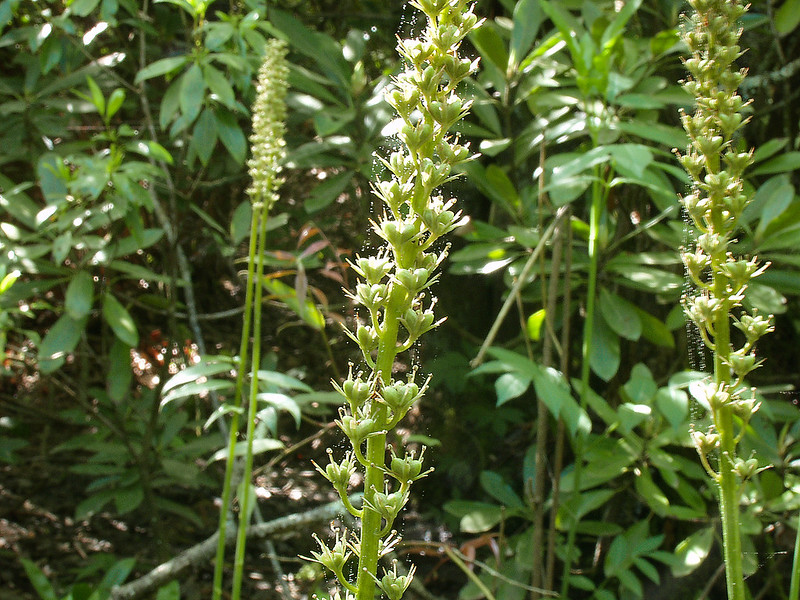 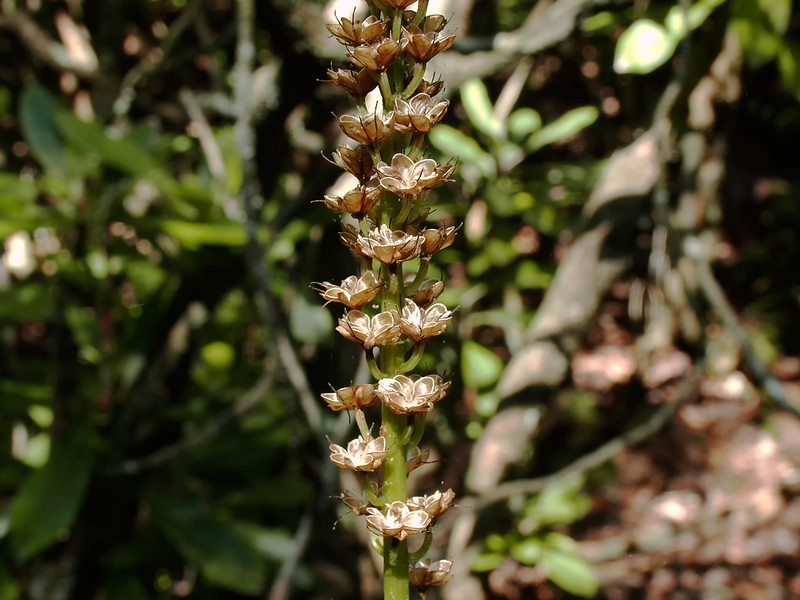 Here is an image of the winged seeds of Helonias bullata: 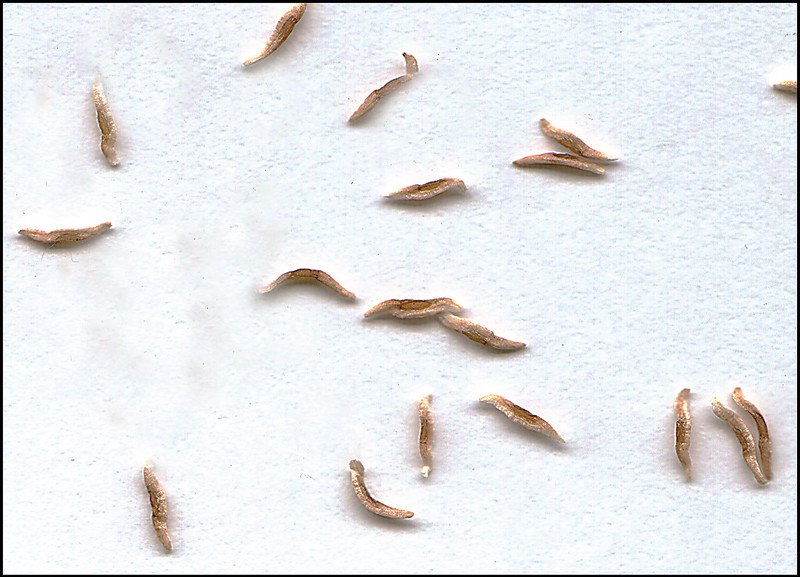 We will leave you with one final image of Helonias bullata. When in full bloom, from a distance, the flowers seem to take on a purplish pink color. This is the result of the merging of the bubble-gum pink flower petals with the cobalt blue stamens. Up close, the color differences are quite evident. It is easy to see why this plant would be in the sights of a poacher and deserves our full protection: 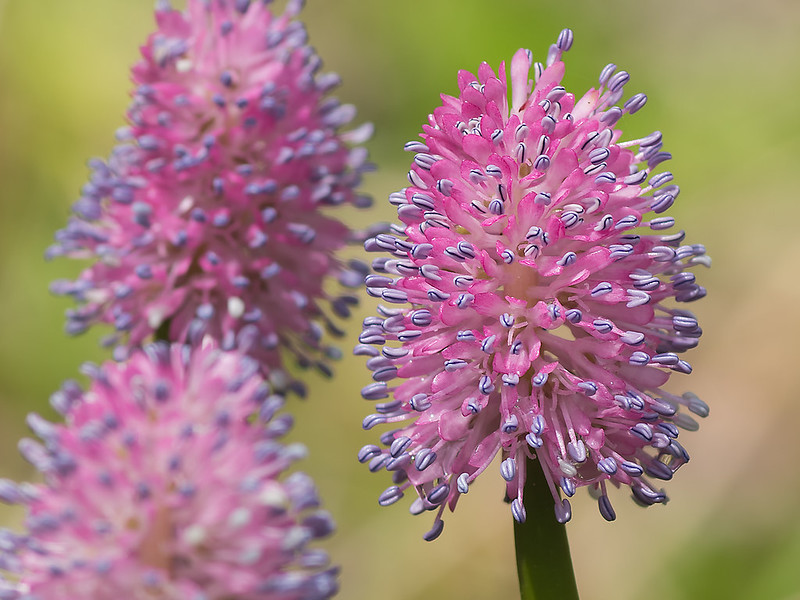 For further information, please click on the link below.